If you plan to use recorded music for a theatrical production, you'll need to pay royalties if the music is protected by copyright. There are several different scenarios for this; for example, you may need music for background ambiance in your lobby and/or as music tied to the performance itself

If you do this sort of thing you should probably get a general license from the organizations that represent the writers and publishers of the songs. The best-known organizations are ASCAP (American Society of Composers, Authors and Publishers) and BMI (Broadcast Music Industries). 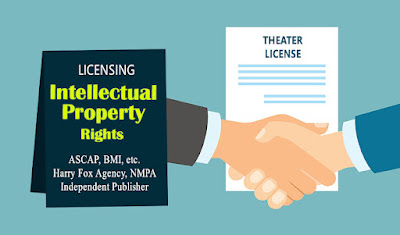 General licensing is used by businesses like restaurants and retail stores for background music and if you use a lot of background music, it's usually cheaper to get the yearly license. Licensing organizations base the amount they charge for the performance licenses on the type of theater and its seating capacity.

You can can even license music from a particular composer or the entire catalog of all ASCAP or BMI composers, but you can't do it for just one or two songs. Recently, April Alsup added the music for her award winning musical "WYSIWYG" to the ASCAP catalog, so her songs are now available for theaters who have subscribed to the ASCAP catalog.

Permission to use recorded music with live stage performances involves what is called "synchronization rights." Those rights are handled by the publisher or an intermediary like the Harry Fox Agency and/or the National Music Publishers Association, the agency that represents most American music publishers. Just let us know if you need any help with any of this.