Creating Musical soundtracks during a pandemic

Lots of things have changed with the music theatre development processes lately. It seems like making a soundtrack for a new music theatre work and collaborating remotely have become the new normal. Perhaps, there are just more use cases for our music material these days, but it really doesn't seem that long ago that we'd all gather around the piano with sheet music in hand for our early rehearsals and readings.

Nowadays it seems it's all done online through our favorite web conferencing software. Unfortunately, online latency issues between computers really prohibits audio from multiple sources in real-time so we use small in-home studios with audio software to record and deliver our tracks remotely. This too can be a bit troublesome, since everyone seems to use a different DAW and organizing all the files for your project can be a nightmare.

Recently, we participated in a webinar with the development team for the The Violet Hour (the Musical), based on the play The Violet Hour by Richard Greenberg and they presented their methodology for producing the soundtrack for the show. The speakers were Eric Price (book and lyricist), Will Reynolds (composer) and Andy Einhorn (music supervisor and conductor). The session was organized by the Dramatist Guild of America and Emmanuel Wilson was the moderator. Their process used the traditional method for recording a soundtrack using orchestral musicians and cast members. 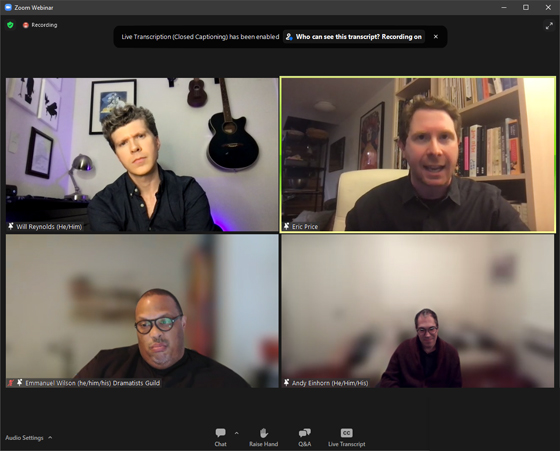 We quickly got into the nitty gritty and Eric described how it was fairly easy to get high quality talent into the studio because with the pandemic raging everyone seemed available. Andy described how they all got together in the same room, but were in separate glass sound isolation booths so they could all see each other, but remain safe from possible infection. Will described how they used multiple tempo mappings for things like fermatas and/or rubato. Then, Andy mentioned the orchestration was integrated afterwards similar to a movie process and the instrumentalists could visually see the tempo maps as they performed.

An alternative method for creating a soundtrack would be to use online collaboration software such as Soundtrap (a Spotify tool). The cloud-based application allowed the development team for WYSIWYG, a Colorado based production created by April Alsup, to work on their scores while the actors add their vocal parts in a cloud-based DAW. It doesn't have some of the nuances of a live string section and dialogue and timing can be tricky, but it isn't as expensive as coordinating an entire orchestra for your recording. Virtual instrumentation is often used with modern pit orchestras and once the parts are approved by the producer the audio mastering team creates the master tracks for distribution. 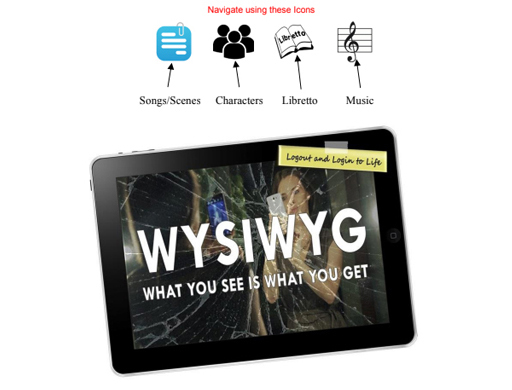 Here's a link to review the new interactive version of WYSIWYG. There's nothing to download and the music is streamed directly to the browser. There are even QR codes if you want to hear the music on your phone as you read the script. Soundtrap has built-in notifications that can notify each participant when the project has been updated. This sort of functionality has been utilized by project managers for enterprise business applications for quite some time and is now being used to streamline the unique requirements found in an artist's creative workflow.

Both projects had a positive outcome and you can hear it in their music. The New York team used tempo mappings and multiple isolation booths to produce a high quality soundtrack in a relatively short period of time, while the Colorado team used collaboration software to pull together actors, musicians and sound engineers into a unified creative process. There are pros and cons to each method, but both show the will power of creative people to produce their art in the face of a pandemic.